LMPO
​Thanks to John Blanck  for the View of Lake Michigamme from the air with George Backus. 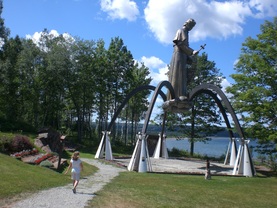 FYI:  All Yoopers know about Bishop Baraga and his snowshoe ministry throughout the U.P., however, maybe more will soon be learning of his work.  Now there is talk that Bishop Baraga  could soon be considered for sainthood by the Catholic Church.  With that in mind, the Upper Peninsula could see an increase in tourism from people interested in learning more about “the snowshoe priest,” who’s currently buried in the Upper Peninsula.
Michigamme is originally an Ojibway term
that is one of the oldest original names for the Michigan area.
The Michigamme Mine was originally called Mt Shasta.  It was located very near the current restaurant location.  Although it had been a popular location for 'rockhounds' to collect those big 'Black Diamonds'  - even with the mine itself blocked for safety - it is no longer available.  As the crews straightened the road, they put the extra boulders on top of the site.  The Almandine garnets can still be found, but rarely are they the size of what could be found at Mt. Shasta.  Progress?  Maybe, but sometimes it is important to preserve historical areas like the Michigamme/Mt. Shasta mine.   Although the mine really opened in 1872, less than a year later problems began for the mine and the town.  On the 19th of June, 1873, a severe forest fire swept over the town site, leaving but one business house and 2-3 dwellings. This destruction caused many people to give up, losing everything. The town was rapidly built up again, and, by the 1st day of  September, nearly every building had been replaced. However, it didn't stop there. A panic of 1873, was felt during October and the Michigamme Mine, which had employed a force of 300 men during the summer, was reduced to 17.  Property, which brought almost any price during the spring, seemed now apparently worthless.
Michigamme History
Circa 1883
"It is a bright, active mining town of 1,800 inhabitants, and derives its resources from several of the leading mines on the range. The site of the town borders on the west end of Lake Michigamme (Great Lake), and the surrounding scenery is very beautiful. The waters of the lake encircle many pretty and picturesque islands, and the scene, as a whole, is one that vividly impresses the mind with its wonderful natural beauty."

Can you believe how similar the area description is a mere 131 years later?
(Well maybe not the inhabitants...)
The Michigamme River, a stream of considerable size, has a very rapid current, foaming over and among the rocks which obstruct its flow; but above the rapids, the river spreads out into a broad, magnificent stream, which disappears to the north, between the rugged hills that come down to its margin and finally obscure it from view. Near Republic, are several beautiful bays, formed by depressions in the surface adjoining the river, and high up in the northerly and westerly slope of the bold, rocky bluff, which, at a few hundred feet distance, surrounds on two sides the largest and clearest of these placid sheets of dark blue water, are the shafts of the Republic Mine.  At one time the river drove the air-compressors of the Republic Mine.