(Located on the Michigamme Museum Property) 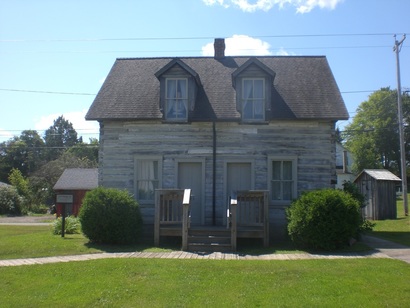 One little house...so much history!

The original owner of the property was the Michigamme Mining Company  and was one of the first structures in town.  Today it is located on the Michigamme Historical Society property.  It was about to be demolished, but in 2000 the Society and the community decided to restore it and move to the main street in town.

In 1896, Napoleon Beauvais purchased the home from the Mining Company.  He and his wife, Julia Cadair Beauvias, moved in.  Unfortunately, in 1903, Beauvais' son from his first marriage attacked Julia and then killed himself.  Julia was able to summon help before she died herself. (Did you find the bloody handprint?)  The home remained vacant until 1916 when Eusebe Dompierre purchased the home for his daughter and her family. ($200 which would be about $4560 today)

The home remained in the Dompierre family until it was moved to its present location.  So much has been learned about the original house when they were rehabbing it.  Notice the double doors that suggest it was a duplex when it was first built.   Stop in the museum for a tour of the restored house and more information on the house's history.
Proudly powered by Weebly