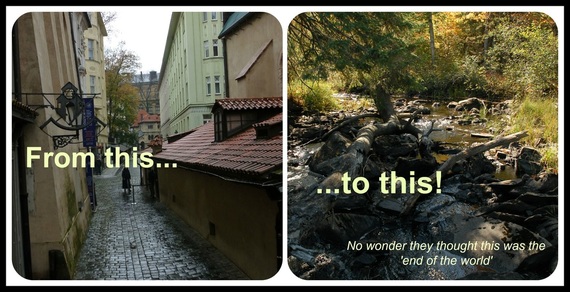 Did you know that there were 5 WWII POW Camps
located in the U.P.?

(Thanks to Don Lorenz for mentioning them in his recent lecture to support the Michigamme Museum.)

The Great Depression affected many families throughout the United States.  One way to help those families was the establishment of the CCC work program.  During the 9 years the CCC was active (1933 – 1942) more than 100,000 Michigan men were enrolled. From planting millions of trees and fighting forest fires,they also built bridges and buildings as well as miles of truck trails. Since the government was trying to create a favorable atmosphere for the men who were away from home for many months, the camp included more than just barracks, bath house and meal area.  There was also areas for entertainment like a library and recreation activities besides an infirmary.  In 1944, many of these camps were converted to German POW camps by adding barbed wire.  Five of these camps were located in the U.P.and housed close to 1000 men.

The closest of the camps were located in Alger County.  (Camp Evelyn & CampAuTrain)  However, Camp Raco was in Chippewa County, while Camp Sidnaw and Camp Pori was in Houghton County.  These camps were mainly established to help lessen the problems created by a lack of manpower.  In 1944, trains brought many of these POWs into the area.

Although very little is left today, some small things like a cement foundation still bears the names of the soldiers who poured it. As the camps were dismantled, much of the furniture and other items were buried.  Over the years things like partial toilets, rootbeer bottles, metal utensils and other small items have been discovered.  These are now protected under the eye of the US Forest Service.

At this camp, German officers were in charge of their POWs to get them up, to meals and even ready for work.  The work mainly was cutting trees but many accidents occurred due to the swampy area and the extreme snowy conditions.  One of the U.S. officers had been assigned to this camp because he had been injured in the war.  At first he was reluctant to work with the POWs but found over time that they were both doing jobs and he had to respect them for that.

The POWs here adopted and named deer in the surrounding woods.  Hans and Gretel were two that they named while they trained another to come into camp at night for cigarettes.  This was an unusual pastime since their guards would use their sub machine guns to supplement the food for the camp.   (This was also found at other camps.)  However, the local conservation officials discovered the use of these guns and stopped them.

Activities at this camp consisted of watching American movies, reading German newspapers, sketching, and playing music.  One prisoner made a wooden Cuckoo Clock that he gave to the camp captain.  Some of the POWs were talented mechanics.  They not only fixed the camp trucks, but drove them too.  However, the more musically inclined POWs wrote music, performed for the camp and even encouraged variety shows.

This was the first camp used.  However, today only a large grassy area with buried cables and grown over roads remains.

It was almost a ‘carnival’ atmosphere as many residents came to meet the train.  As the German POWs exited the train, they laughed and waved at the people.  Although many residents were distrustful, their fears were not warranted.  Over the years,

An unusual activity here was the establishment of a Zoo.  The POWs captured mice, squirrels, snakes and other small animals.  It was not their only activity.  The 16 piece orchestra was often heard.  The education at this camp was strong.  Classes in English, German, French, math, shorthand and music history were offered allowing the men to increase their work skills. To this end,  workshops were offered for machine construction, technical drawing, electrical skills, and agriculture development.

By 2000, very little was left of the camp.  A group was planning on reassembling one of the towers.  It had been taken down and stored in two locations. That really is all that is left besides the memories of the residents.

At first these POWs rebelled against the authorities.  They broke saws and punctured tires.  This seemed to end when they were forced to walk back to camp (12 miles) in a snowstorm.  After that, they became hard workers.  Once they seemed to settle, a friendlier atmosphere was found.  Several of the POWs became personally involved and seemed to be reminded of their own relatives back home.  Often the POWs would throw candy to the children and the residents would throw vegetables to them and some even brought fishing gear to the camp.  This only extended to the general soldiers.  There were also SS officers at this camp who continued to support Hitler with their attitudes…they did NOT receive similar kindnesses.

Some of the activities at this camp included a choir, competitions of soccer, track and ping pong.  Oh and don’t forget the making of moonshine under their barracks.

Generally, the German POWs received $.80 a day for their work. (This amount allowed them to purchase candy, cigarettes and even beer.) The companies that profited would then pay the government the regular ‘going rate’ for the work.  Ironically, the wood that was cut by these men went into making crates to ship war supplies to our troops.  Although a concern was for the prisoners to attempt to escape, very few actually did.  Between the language difficulties, the fear of retribution from the residents and even the distant location of the camps, the idea of fleeing seemed to detour the POWs.

In fact, between the good conditions of the camps and the treatment the POWs received, many friendships resulted.  An example of this was the red cloths that the guards put on the POWs.  Since they were working in the woods, they would be more easily seen by the local hunters.  Each camp had supplies sent by the German Red Cross, regular mail delivery and church services.

When these camps were disbanded in 1946, the men had to be sent back to their own countries.  Many of these men had formed such good relations with the local residents that they returned to become upstanding members of the communities.

Although there were 151 camps nationwide for war objectors run by church groups, there was only one in the U.P.  80 persons were considered unsuitable for the other camps because they were so disruptive.  60 of them were college graduates and went out of their way to create problems.  Their jobs were to help the Seney National Wildlife Refuge.  Instead, they destroyed property, threatened the supervisors, polluted the water and stopped those who attempted to work.

This camp was run by civilian supervisors.  They were unable to ‘encourage’ them to work and could only resort of striking one if they were threatened.  Sweeping out a truck bed might take 4 hours, or all day to cut a tree.  However, these men were allowed to attend movies, buy alcohol or meet up with girls in nearby Manistique.  As one resident said, “…had more respect for the POWs who had fought for their country and were working hard here than these fellow Americans.”

After only one year, this camp was disbanded and most of the war objectors were sent to California.

“The Enemy in Our Midst” produced by John Pepin

The Historical Societies of Marquette and Alger County