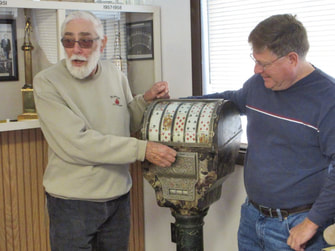 George Block — miner, entrepreneur and purveyor of wines and liquor — built a saloon on Main Street in Michigamme in 1871. The establishment was the first completed building in a town built around the mining and lumber trades.
The Michigamme Museum now stands on the very spot where George Block did business. Block, who was a native of Alsace, France, emigrated to America in 1861 and settled on the Lake Superior shoreline in Ontonagon with 30 cents to his name. He worked for 10 years as a miner, moving to Marquette County and finally Michigamme, where he built his saloon.
One of the fixtures in Block’s Saloon over the years was a trade stimulator — an early version of a slot machine — used to entertain saloon patrons by enticing them to play poker by inserting a token and pulling a lever that would then spin five reels.
Block descendent Randy Melvin returned the game, along with a turn-of-the-century steamer chest and spittoon, to the Michigamme Museum on Friday.


The rare cast iron machine, which is painted with an intricate marble pattern, is 115 years old, and just as it did then, if you insert a nickel, the reels still spin.
“One other thing about this machine is the appraiser said there are less than 10 of them known to still exist,” Melvin said. “But really, the value in this is it belongs here. It has come back home to stimulate minds as they see it. What the family is hoping (is that) this will do good for the future and for the community, that it will inspire young people who visit here to read about history or engineering and just entrepreneurism and do all the wonderful things that museums are intended to do.”
Melvin’s other connection to the once booming lumbering and mining town is his cousin, Don Moore. Moore — also a Block descendent — has been a volunteer and advocate of the Michigamme Museum since it opened its doors in 1995.
“We also knew that Donny and what he has put into this museum and how dedicated he is,” Melvin said, “and you know what he has done — that we knew it would be in very good hands and we want that to continue on into the future.”
Michigamme Supervisor William Seppanen, along with several other residents who witnessed the unveiling of the items, called them priceless.
“I can tell you, Randy, that this belongs to Michigamme,” Seppanen said. “They have come home, and even if someone offers us a million dollars for them, we would never sell them.”
Several pictures of the original building, which burned down in the late 1970s along with photos of Block and his descendents were presented to Melvin by Moore.
The building that once stood where the museum stands holds an intimate family connection for both men.
When he was a child, Moore said he and his family lived above the saloon.
Melvin’s father, Robert, had fond memories of his formative years in the Upper Peninsula, and especially Michigamme.
“And I remember hearing stories about Dr. Seacotte, the train station … the saloon, granddad, making horseradish sauce and just little things about the town and you know, granddad’s saloon,” Melvin said. “He had a little shot glass, it looked like a beer mug, and they used to put him up at the bar at granddad’s — a big shot up at the bar with a little shot glass.”
Moore, a retired Ford auto worker, said the museum is working on a new project: a permanent home for its 1900 horse-drawn steam fire engine.
The museum, with the help of a loan from Michigamme Township and years of fundraising, was purchased for $150,000 in 2007.
“I have been saving pop cans since we started with the steamer,” Moore said. “And when we paid off the steamer, we just kept collecting pop cans. We need like $100,000 to build this garage. We have about $70,000 but we don’t know how much this garage is going to cost us.”
The proposed project will be built on a lot next to the museum, a replica of the first fire hall in Michigamme, Moore said.
“It burned down,” Moore said. “It caught fire and burned the Michigamme House down. Then they built the Community Building there. So, we are going to build a pole barn and we are going to put a false front on it. We have been finally making progress after a lot of years.”
Moore said the museum, which sees over 500 visitors per year, is about more than the history of the region.
“It’s about people,” Moore said. “And it’s about how they lived and what they did to get by, to get through.”
Proudly powered by Weebly