​May ​she​ wave forever! 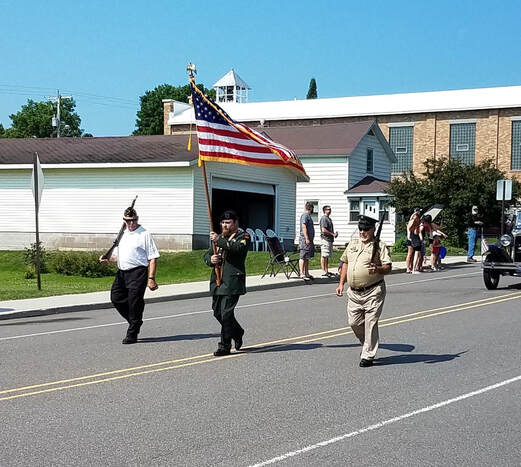 ​Old Glory, Stars and Stripes, the Star Spangled Banner” - From its inception, the American flag has been an important part of our nation’s history. Surviving over 200 years, the flag has both physically and symbolically grown and developed in times of both achievement and crisis.

The American flag is a symbol known worldwide. It has been the inspiration for holidays, songs, poems, books, artwork and so much more. The flag has been used to display our nationalism, as well as our rebellion, and everything else in between. The flag is so important that its history tells the story of America itself.
It represents the freedom, dignity, and true meaning of being an American. It has been with us through our war times, our sad times, but also in times of our greatest joys and triumphs. The flag went through many variations before becoming the flag we all know and love.
In fact, it took from January 1, 1776 to August 21, 1960.

It has also been shrouded in legend and mystery for many years.   Did Betsy Ross truly design the first flag?  Do the colors really stand for something significant?  We will explore this and other myths.

So let’s take a look at the components that make up our current US Flag.  We have what’s known as the canton or blue field, the stars, and of course, the stripes.
So where did these designs come from?

The earliest use of stripes in flags in what was to become America is from the “Sons of Liberty” Flag.  The Son’s of Liberty were the original “Tea Party” members; These are the guys that threw the chests of tea overboard into the Boston Harbour.

Starting after the stamp act in 1765. The Sons of Liberty began their protesting. They came up with a flag that looked similar to this only with less stripes. The pattern however was the same and it could be displayed either horizontally or vertically.  This may have been the pattern that contributed for the stripes on our flag.

In 1775, at the Beginning of the Revolution, Independence had not yet been declared. The Continental Congress was meeting in Philadelphia when a somewhat obscure militia Colonel from Virginia came forward in his uniform and volunteered to take command of the troops outside of Boston overlooking Boston Heights. That Colonel was George Washington.

When he left Philadelphia, he took with him two flags. The Grand Union or The Continental as it was called was the first flag under which continental soldiers fought.  It uses the alternating red and white stripe pattern similar to the Sons of Liberty Flag only there are 13 stripes signifying the 13 colonies.  However, notice that instead of stars on a blue field, we have the “Kings Colors” also known as the “Union Jack”. This flag had a very specific meaning.  It meant that we were fighting as 13 united colonies but under British Rule.  Remember, at this time we had not yet declared our Independence.

The other flag that Washington took with him is known as the Washington’s Headquarters Flag. Look familiar?  As you can see, the entire field is BLUE.  There are 13 stars arranged in a pattern known as the 3-2-3-2-3 pattern.  5 rows of alternating stars of 3 stars, 2 stars, 3 stars, 2 stars, 3 stars. However, you will also notice that they are 6 pointed stars. A slight difference from the 5 pointed star on the current flag. This would be the first use of the star pattern on an American flag and today you can see a copy of this flag hanging in front of Washington’s Headquarters at Valley Forge.

A year later, on July 4, 1776, congress declared its independence from Great Britain.  From that moment on, we were fighting for our independence. Yet the continental congress still did not design a new American flag. That flag came about on June 14, 1777 when congress passed the first of three major flag acts . The first act stated that “the flag of the US shall consist of 13 alternating stripes of red on white with 13 white stars on a blue field forming a new constellation. What it left out was the following:So who designed the flag?  In 1776 you couldn’t go into a store and buy a flag off the rack.  Back then, flags were made in one of two ways.  Since most Flags had a naval use, you could go to a ships chandlery - a store that outfitted ships - and the chandler would contract with a sail maker or in many cases an upholsterer to make the flag. An upholster in colonial times had more functions that what we typically think of today. Besides working on furniture, they also made flags and other military equipment. This is where the legend of Betsy Ross comes in to play.

We know that Betsy Ross was an upholsterer who made flags for the Pennsylvania Navy. What we don’t know is did she really design the first flag? There is a great deal of controversy about this.

In 1870, Betty Ross’ Grandson was addressing an Historic society in Philadelphia and said that his grandmother told him that she met with George Washington and others and she designed the flag. But did she design it or did Francis Hopkinson design it?

Francis Hopkinson was one of the signers of the Declaration of Independence from the state of New Jersey. The only evidence of who made the flag is a bill that was submitted to congress by Francis Hopkinson that said for designing the flag, you owe me two casks of ale. What we don’t have is a picture of that flag, a written description of the flag, or even a sketch of the flag. So, the mystery remains.
Regardless of these facts, the legend lives on and the first flag of the Revolutionary Period is referred to as “The Betsy Ross” flag…the pattern of stars on the blue field is known by three names, The Betsy Ross Pattern, The Philadelphia Pattern, or The Single Wreath Pattern. The blue field on the flag also goes by three names - the field, the union, or the canton. Because congress did not set the specifics of where the field would be or how the star pattern should look like, or how many points the star would have, during this period, and up until 1912, the stars could be arranged in any manner that a flag maker would choose.

When congress put together the notion of the flag, they blended the already established design of alternating stripes of red on white signifying the united colonies and a blue field with 13 stars (just like the Washington’s Headquarters flag).  Many people believe this may have been the flag that Francis Hopkins designed, but once again this is only speculation.

This pattern is known as the Cowpens pattern. Another well-known flag during this time was the Easton Flag.  Interesting design right?  But remember, Congress did not specify where all of the elements should be placed. After the Revolutionary War ended, our country wrights a new constitution. We elect Geo Washington president and in 1792 we bring in two new states – Vermont and Kentucky.  This begs the question,  what do we do with the flag?

Because the original flag act called for 13 stripes and 13 stars to represent the 13 colonies, what do we do to signify the adding of two new states to the Union? At this time, Congress passes the 2nd flag act and it states that from now on we would add one stripe and one star for each new state. This new 15 star and 15 stripe flag is known as The Star Spangled Banner.  It is this flag that flew over Fort McHenry and inspired Francis Scott Key to write our national anthem. After the War of 1812 we were adding more states again and as we incorporated more stars and stripes into the design, our flag was starting to look a little funny.
So in 1818, Congress passed the 3rd of the three major flag acts.  It stated that the design was to go back to the original configuration of 13 alternating stripes of red on white, representing the 13 original colonies, but that we would add one star for each new state. However, once again, it did not specify what pattern the stars should be arranged in or the amount of points that were to be on the star. So we had many variations of flag design during this time.

Finally, in 1912 President Taft established the pattern of stars that we know today. The 48 star, 49 star and 50 star flag all conform to this pattern.

Our flag is an inspiring symbol that unites us all as American citizens. The unique history of the American flag follows the history of our country and reminds us of the triumphant beginning of the United States. The 13 stripes: a symbol of the first 13 colonies. The stars: a symbol of our country's 50 United States. As our country grew and developed, so did our flag. It has followed the fate of the country itself and, in the future, our flag may even change again.

Today, our flag remains a vibrant symbol of the American principles of democracy, justice, and freedom, and of course the everlasting memory of those who have sacrificed their lives defending these intrinsic principles of the United States of America.

Over two hundred years ago, the Second Continental Congress officially made the Stars and Stripes the symbol of America, going so far as to declare that the 13 stars gracing the original flag represented "a new constellation" with the ideal that America embodied a bright new hope and light for mankind. Today, our flag continues to carry the inspirational and fundamental convictions of our great nation, and will continue to do so for many years to come.    BY Terry Ruggles
Proudly powered by Weebly